Three days in Beijing: the best things to do

About 6 hours by train divide Datong from Beijing, the arrival station of my Trans-Siberian and Trans-Mongolian journey. We are at almost 6000 km as the crow flies from Moscow, and there are about 7500 km of railway behind us.

Maybe it happened because it was the last stop of my train journey, but I was enchanted by Beijing. This city has left unforgettable memories in me.

First of all, a couple of tips:

Beijing in a nutshell

The following is an interactive map. The blue pins mark some of the most popular points of interest in Beijing. The brown pins mark modern architecture hot spots and the orange one some of the most famous sections of the Great Wall of China (zoom out the map to see them).

Finally, the black pins mark Beijing Railway Station and the Beijing 161 Lama Temple Courtyard Hotel, where I stayed. It is a traditional building located in a hutong: the historic districts of the capital with many narrow streets, small merchants, and courtyard houses (Siheyuan).

Very important: the geolocation used in China has a different coordinate calculation. Therefore, there is a shift of many meters between the map and the actual position of the GPS. For this reason, unless you use a Chinese application, you need to modify the base layer of my interactive map above and switch to satellite. By doing this way, all the pins are back at the right coordinates, and you will be able to locate yourself looking at the images from above, rather than at your pointer on the map. 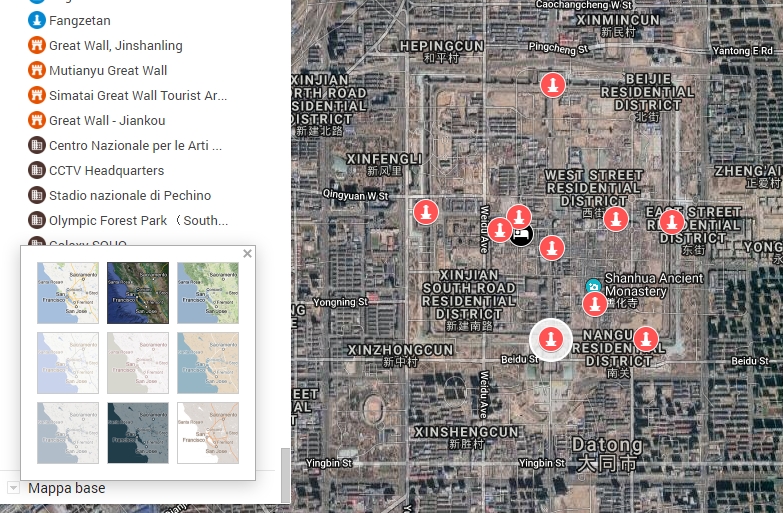 Aside from a full day on the Great Wall of China, my visit to Beijing has been a continuous shift between ancient and modern architecture. You can thus choose the attractions I list below according to your interests. Or you can make a mix of both like I did.

This palace complex (almost 1000 buildings) is the largest in the world. It has been for nearly 500 years the imperial residence of the Ming and Qing dynasties.

The Forbidden City is surrounded by walls, and the main entrance (Tiananmen Gate) is well-known because of the portrait of Mao Zedong on the facade.

This Imperial Palace is today a crowded open-air museum hosting, archives, halls, exhibitions, temples, etc. On its back, there is Jingshan Park.

It is also possible to walk on the walls and see the Forbidden City from the top of its golden roofs.

Right next to the Forbidden City, Tiananmen Square is one of the largest squares in the world, but its fame is also due to what it represents.

Here, for example, Mao proclaimed the birth of the People’s Republic of China, and in 1989 there was a famous demonstration for democratic freedom.

In the middle of the square, there is the Monument to the People’s Heroes. It was built in memory of the martyrs of the Chinese revolutions.

Monument to the People’s Heroes

Around the square, there are several buildings and places of interest, such as the Mausoleum of Mao Zedong, the National Museum of China, and two famous gates: Tian’anmen Gate (north) and Qianmen Gate (south).

This famous building is also known as Beijing Opera House and is nicknamed “The Giant Egg” because of its shape. It is located a few steps from Tiananmen Square and, compared to the surroundings, is a big jump in the future.

These buildings or building complexes are located at the four cardinal points in an almost orthogonal position to the center of Beijing, represented by the Forbidden City.

The Chinese capital is made up of 7 concentric rings, and the four temples are located more or less around the second ring, they are best known as:

The Temple of Earth is located within a large park (Ditan Park) with a lot of attractions. It was Built around 1500, and it is located north of the city because it is at this cardinal point that the Chinese tradition associates the earth.

The shapes of the temple are square and angular because the square is, in the Chinese tradition, a symbol of the earth.

The Temple of Heaven is located south of Beijing opposite the Temple of Earth. For the same symbolic reason, it favors circular forms and colors, as opposed to the square shapes and the gray of the Temple of the Earth.

Modern architecture on the second Ring

In complete contrast to the four temples, the second ring surrounding Beijing houses some modern buildings built in different styles and architectures. In my opinion, it is worth taking a leap into modernity and taking a tour of these buildings.

These are quite colorful residential buildings connected to each other by pedestrian walkways placed on the upper floors. There is vigilance at the entrance, and it is officially forbidden to take photographs. Anyway, it is possible to visit the courtyards.

It is a very famous office and shop complex designed by the star architect Zaha Hadid. The complex has the shape of four curved towers, with glass roofs and internal courtyards. I loved it.

The Lama Temple, still inhabited by monks, is the largest temple of Tibetan Buddhism in Beijing.

Confucius Temple is located not far away from the Lama Temple and is dedicated to Confucius, his religion, and ethical-spiritual tradition.

Modern architecture on the third Ring

Several modern architecture buildings are located along the third ring or between the second and third. Most of them are easily accessible by subway, therefore, if you have enough time, it is worth a trip here.

The classic complex of skyscrapers brightly lit at night.

Certainly among the most original buildings in Beijing. It is located almost opposite the China World Trade Center.

It is the largest museum of Chinese Art History.

Other buildings and places of interest

It is an ensemble of palaces, with lakes and gardens located northwest of Beijing. It was an imperial garden during the Qing dynasty.

It is not a classic pagoda because it was built only with bricks. It was built as a funerary monument for the Chinese Buddhist monk Wansong and has been renovated in 2013.

This temple is located in a park northwest of Beijing and stands out for its unusual architecture. It is, in fact, a single building made of 5 pagodas. The park itself is decorated with several sculptures, ancient engravings, a museum, and a small shop.

It is one of the most important Taoist monasteries in Beijing.

The bell and drum instruments are very representative of Chinese musicality and were here once used to mark the hours. These two ancient towers are today tourist attractions, and you can climb to the top where you can see Beijing from above.

Located between the fourth and fifth ring, and therefore not really close to the center, it is easy to reach by subway. There are at least two reasons to go to Beijing Olympic Park:

Some of the buildings you can enjoy here:

Nicknamed “Bird’s Nest” for the steel frame that surrounds it.

I add it to the list just to show the different architectures and styles you find in the park.

A UNESCO World Heritage Site and one of the seven wonders of the world, the Great Wall of China is a gigantic defense work. It was built over millennia to defend the Chinese populations from the Mongol cross-border raids.

There are several accesses to the Great Wall. Some sections have been fully restored, others only partly. Some segments are still abandoned and waiting to be renovated.

In fact, the Great Wall of China extends for a length that makes any global maintenance intervention impossible.

There are several accesses to the Great Wall, and the general rule is only one: the closer you are to Beijing, the more crowded it is.

Those who have little time can reach the nearest accesses in about 30 minutes of travel. Those who prefer to enjoy a walk alone should visit the most distant sections instead (two hours or more from Beijing).

Some of the most famous sections are:

The pictures below are all taken in Jinshanling.

The slope percentage in Jinshanling sometimes is quite high, and according to my altimeter, we were about 800 meters above sea level. Therefore, as for the Simatai section, Jinshanling is not recommended for families with young children.

My Trans-Siberian and Trans-Mongolian journey from Moscow to Beijing ended here.

This was an experience that changed me a lot, both as a traveler and as a person.

Trans-Siberian and Trans-Mongolian Railway – All you need to know

Trans-Mongolian Railway – The best things to do in Datong