One day in Zagreb: the best things to do

I was only passing through and had just a full day to go around and visit Zagreb. I arrived on Saturday in the late afternoon and left on Sunday evening.

Not having planned a longer stay was my first regret just arrived. I was, in fact, welcomed by a city that is moving but is not chaotic. The narrow streets, the picturesque alleys, the glimpses of the medieval town, as well as the many street-art works make a walk in the city an absolutely pleasant experience.

Zagreb in a nutshell

The following is an interactive map. The most popular points of interest are marked with blue pins and the two most important churches of Zagreb with red pins. The parks are marked with green pins and some museums with brown pins.

By zooming in and out the map, you can also see some attractions that are not directly in the city center. I have listed them at the bottom of this post and really recommend to plan some of them if you have a little more time available. 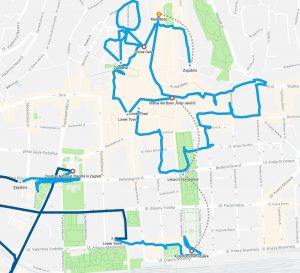 My city tour started from the central station and, despite the limited time available, I managed to take a tour of both the lower and upper town.

It seems that the GPS froze every now and then, but the image gives you at least an idea.

The upper town is the medieval part of Zagreb. It is located on a low hill and is the most picturesque area of the city, with charming alleys and narrow streets. There is also a cable railway that connects the lower to the upper town.

The lower town is the nineteenth-century part of Zagreb, the one with wider avenues and parks, and some well-known museums.

The lower town is probably a good starting point for a city tour. You find here the central station and many other public transport connections. A walk through the lower city certainly takes a good half-day or even a full day if, for example, you visit a museum or two.

The Central Station was built in neoclassical style and completed in the late 1800s. The square in front of the station is dedicated to King Tomislav (a Croatian king during the Middle Ages) and hosts a statue of the King riding a horse.

The Art Pavilion is probably the most representative building in the Lower Town and houses today contemporary art exhibitions. It was also built in the late 1800s but in the art nouveau style and painted in yellow. The whole surrounding park decorated with a fountain and some flowers deserves a nice walk.

Several attractions are located just a few minutes walk from the Art Pavilion:

An English Garden that dates back to the late 1800s and is located in front of the imposing building of the Croatian State Archives. It is decorated with bridges and fountains and is open from early April to late October. The entrance is free, but you have to check the opening hours in advance. I had to look at it from the outside. Just saying…

Also built in the late 1800s in the Renaissance style, it is an imposing palace housing the art collection by Wiltrud and Ante Topić Mimara, donated to the city of Zagreb.

It is the most important square in Zagreb and one of its primary urban nodes. It is also the border between the lower city and the upper city. On one side of the square, there is the Zagreb 360° observation deck: if you go up to the sixteenth floor, you have a great view of Zagreb from above.

Also built in the late 1800s in the neo-renaissance style, it is painted in bright yellow, and it’s impossible not to notice it.

The old part of Zagreb, the medieval one, is located on a low hill connected to the Lower Town by narrow streets, stairs, or by the shortest cable railway in the world. The funicular ends at the foot of the Lotrščak Tower, one of the city’s old defensive ramparts. Here still today, to respect the tradition, a cannon is fired every day at 12 PM.

The two most famous churches in Zagreb are located in the Upper Town: the Cathedral and St Mark’s Church.

The Cathedral has been repeatedly destroyed and rebuilt over the centuries. It is now a neo-Gothic church with two 100 meters high towers. It is the tallest religious building of Croatia.

St. Mark’s Church was built in Romanesque style and then enriched with Gothic elements. It stands out for its roof made of colorful tiles. It is one of the most photographed places in the city.

Next to St Mark’s Church, and here and there in the Upper Town, there are several administrative and historical buildings, including the Croatian Parliament.

The Dolac Market is the place where Zagreb’s scents and colors meet. You find it in the heart of the medieval city between the two churches.

Finally, the Upper Town hosts several museums of which, in my opinion, at least two should be mentioned for their originality:

I researched a bit before leaving for Zagreb, but I didn’t have enough time and wasn’t able to visit any of them.

I have been for a meal at the Mali Medo restaurant, which, despite the touristy location, had tables outside, a menu with a lot of choices, and fair prices.

If you have extra time

For those who have more than one day available several interesting things can be done around Zagreb or just outside the city center.

It is among the largest and oldest parks in Europe and can be reached by tram from the city center.

It is another place for relaxation or outdoor activities. There are several clubs on its banks that open in the evening. It can be reached by tram from the city center.

It is a medieval fortified town located on a hill just outside the city.

It is a big monumental cemetery and is one of the most visited places in Zagreb because of its incredible architecture. I couldn’t resist and even if in a hurry, I have been there.

The Furnace and the Farm

A weekend in Lyon: the best things to...