One day in Florence: the best things to do

One day walking tour in Florence sounds like a crazy thing. And maybe it is. Since the city is a kind of open-air museum, one day is very little time to see its major attractions. Moreover, it is practically impossible to visit the museums, some of the richest and most important in the world.

But I had a day free, and since the alternative was to spend it at home, I preferred to jump on an early morning train and make a city tour alone and exclusively on foot. I traveled back home at night on the last train.

Anyway, Florence is not so big, and if you carefully plan your visit, you can get the most out of your trip.

With all that being said, why am I writing this post then? The time has been short, you find on the internet everything about Florence, and my photos are just snapshots taken on the fly? That’s easily said: to describe the experience of spontaneously organizing a day trip to one of the most famous cities in the world. If I did it, anyone can do it. And it’s still a rewarding experience.

Artistic, historical, commercial, and cultural center Florence is known as the birthplace of the Renaissance, a style of renewal as opposed to the darkness of the Middle Ages. 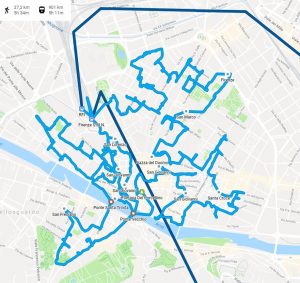 What you need for a one day trip:

I have been thirteen hours around, of which five and a half on foot through the city, with two breaks for an unforgettable lampredotto. The lampredotto is a sandwich with meat and is the traditional regional street food in Florence.

The screenshot of my tour (light blue line) shows an indisputable fact: it was a kind of half marathon or even more (27 km!).

Despite that, I could not visit any museum, and it was already dark when I arrived at Palazzo Pitti. It was also impossible for me to reach Piazzale Michelangelo because I had to go back to the railway station.

Florence in a nutshell

No matter where you start your tour (hotel, railway station, etc.), in Florence, you can randomly stroll around the historic center, passing from one attraction to another without following an exact path. Although the metropolitan area is quite big, the most popular attractions are all gathered in a not very large area, and they are all within easy walking distance.

How not to start from here in describing Florence attractions? Ok, the number of tourists in this area is impressive and sometimes even to take a picture you have to long wait for the right moment. Unless you came here at sunrise, there are just two things to do: keep calm and enjoy the beauty.

Piazza del Duomo hosts some of the most famous city attractions which, despite being built over several centuries, almost seem to compose a single architectural complex:

Another of Florence’s landmarks. It has an unusual “L” shape and hosts so many monuments, statues, palaces, etc., that it is impossible to list them all without using a lifeline. To name a few:

It is one of the most famous bridges in the world with its closed-spandrel segmental arch. Its shape is probably the thing that mainly impresses the visitors, together with the two rows of craft shops built along it.

It is another of the most famous churches of Florence and a masterpiece of Italian Gothic. This architecture style diverges from traditional Gothic because, for example:

The Basilica houses the tombs of Michelangelo, Galilei, Rossini, and many others.

The first thing you will notice here is the radical change of style. In fact, this Basilica, unlike the previous ones, does not have a bright marble façade, it is darker and made of rough stone instead (probably unfinished).

The Basilica of St Lawrence is, however, only part of a monumental religious architectural complex, which includes, among other things, the Cloister, the Old Sacristy, the New Sacristy, the Laurentian Library and the Cappella dei Principi (Chapel of the Princes

Well, this list could be very very long. This is only my short selection:

If you have already seen a panoramic view of Florence, this has been made 99% from here. Since it is not right around the corner, I didn’t have the time to go there. But I know this place, and it’s in my Florence to-do list.

If you spend one more day in the city, you will have the chance to see at least 1 or 2 museums, I have these three in my to-do:

It was a long day, I have seen a lot of attraction, and there are still plenty to see. Conclusion: no matter how much time you have, but if you have some, go to Florence!

A weekend in Stuttgart: the best things to do

A weekend in Frankfurt: the best things to do

A weekend in Lyon: the best things to...